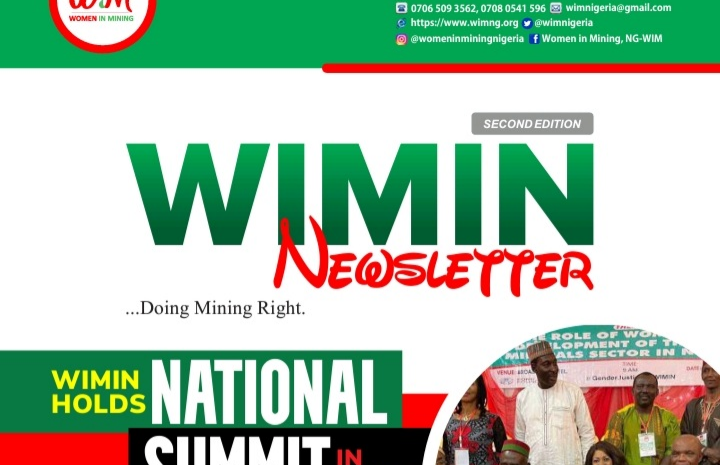 Friday 30 December, 2022 – Women in Mining in Nigeria, a non-governmental organisation focused on protecting the rights and poromoting the interests of women in the mining sector, has today 30th of December 2022 launched the second edition of its quarterly Newsletter. This is in line with the group’s commitment to constantly keep stakeholders abreast of its activities and programmes, educate players in the sector about mining-related issues, and inform the public about plans for the future.

The second edition, which captures events within the period beginning in October and ending in December 2022, also comes as proof that the publication has come to stay. Speaking on the release, President of Women in Mining in Nigeria, Engr Janet Adeyemi, noted that beyond keeping people abreast of what WIMIN has done in recent time, what it is doing, and what it intends to do, the Newsletter also serves as a means of accountability to all stakeholders.

“It is important that we have a publication such as this which we can also use to reflect on all we have done in the last three months, while also documenting progress and triggering ideas for more action. This edition is packed with a lot of stories from impact-driven activities  as well as useful educational materials that operators in the sector will find useful, such as our detailed piece on the different mining licenses and leases, and their requirements for applicants”, she said.

The publication opens with a report of the National Summit which was held in Abuja and drew participation from WIMIN chapters from across the nation, including Taraba from the North East, Plateau (North Central), Osun (South West), Ebonyi (South East), and Edo (South South). The Newsletter also contains details of the largest Gold and Gems Conference and Exhibition ever hosted in Nigeria which was organised by WIMIN Lagos Chapter in November 2022.

Other items in the quarterly include WIMIN’s participation and contribution in the planned review of the COMEG Act of 1990, inauguration of the Girls for Mining (G4M) Club in several states across Nigeria, the soon-to-be released documentary that captures gender rights issues in the Nigerian mining sector, the soon-to-be-launched mobile application where alleged victims of human rights violations in the mining sector can report abuses and receive timely intervention, as well as the launch of the Rapid Response toll-free line for easy access to help.

The second edition of WIMIN’s quarterly Newsletter also comes as the perfect way to wrap up what has been an eventful year for the organisation. Recall that several state chapters of the association were inaugurated and organised in the last one year. Also, several members were assisted in the formation of cooperatives, in mining education, Safety  Health, and Environmental (SHE) toolkits, safe and mechanised gold and gems processing and faceting, and other mining-related concerns.

WIMIN also launched the Women in Mining Training Institute (WIMTI) at the beginning of the year and has held virtual classes consistently every third Thursday of each month, featuring industry leaders and experts in mining, geosciences, health and environmental sciences, climate change, and gender rights advocates, among others.

Follow the link below to see this month’s newsletter

Zero carbon is only half